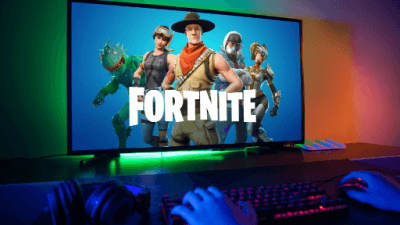 Leaks of a new image mistakenly posted on the Nintendo eShop have surfaced, along with what new superhero skin awaits for the Chapter 3 Season 4 battle pass.

Fortnite Season 4 is still a bit ways off, but leaks are already starting to pop up, such as skins comings to the battle pass and Fortnite Item Shop. Fortnite is one of the most popular online games around.

The battle royale is a constantly evolving title thanks to Epic Games constantly introducing new ways to challenge and surprise its players.

It’s no wonder many players are always eager to learn as many updates about Fortnite as possible. With Chapter 3 Season 4 right around the corner,

it was only a matter of time before details started leaking out ahead of time—as is always the case when it comes to anything Fortnite-related.

A new Fortnite image was posted to Nintendo’s eShop on September 1st, showing what looks like a member of The Seven—the interdimensional group—sticking their hand up as if they’re drowning from some kind of inky, metallic substance.

Based on what the data miners have to say about this, they speculated that Epic Games might have accidentally posted this tidbit of Chapter 3 Season 4 early if it isn’t something else entirely.

The image might not appear much to those who don’t log into their Fortnite account regularly, but it gave players with Fortnite accounts an idea of what to expect from future updates.

Fans speculated that the member of The Seven that’s swimming in ink from the picture is The Paradigm—a character rumored to be a central figure for the upcoming season.

Moreover, the hand shown also matches a recent skin for The Paradigm, so it seems likely that it’s her.

Adding more fuel to the fire, the Fortnite community also suggested that The Paradigm will be voiced by none other than Brie Larson.

This claim is due to Donald Mustard recently following her on Twitter, lending credence to her being the main character featured in the leaked image.

Who knows? It could be that this image might be teasing the return of a character that players hadn’t seen in Fortnite for a while or thought to be dead based on the battle royale’s lore.

That inky stuff shown from the leak will also allegedly be part of the new season. FNBRWatch—a Twitter account dedicated to leaks and news circulating in Fortnite—reports that Epic Games is set to reintroduce the sand-tunneling mechanic from Chapter 2.

For now, nobody has any concrete theories about what this liquid metal might be.

Still, with the way things have been working with Fortnite lately, it’s plausible that we get some sort of quest to end the current season and have a bit of interaction with these things (plus the NPCs).

Nothing too significant has come out yet, but prominent Fortnite leakers claim that the battle pass for Chapter 3 Season 4 will include another Marvel superhero skin: Spider-Gwen.

We already know that our friendly neighborhood Spider-Man is available as a skin in Fortnite, so including Spider-Gwen makes sense. Plus, Spider-Gwen starred as one of the main characters in the Spider-Man:

Into The Spider-Verse film. Making Spider-Gwen as a skin in Fortnite already has some players thinking they wouldn’t be surprised if Miles Morales also followed suit.

It’s weird how he’s not in Fortnite already—considering his uncle, The Prowler, was added to the game in Chapter 3 Season 2.

Everything is Still A Mystery

This season has been chill for players with Fortnite accounts, considering the last season was about war and conflict. It’s unclear what direction things may be moving; for now, these are the only teasers we have for Fortnite Chapter 3 Season 4.

If we’re to follow how things usually go for Fortnite, we’ll probably know more during the week before the new season launches.

Even if huge-scale live events aren’t happening as often as we would have liked, Fortnite always has some season-ending shebang planned and a big premiere for the following season.