Is CPU Or GPU More Important For Video Editing? Guide In 2023 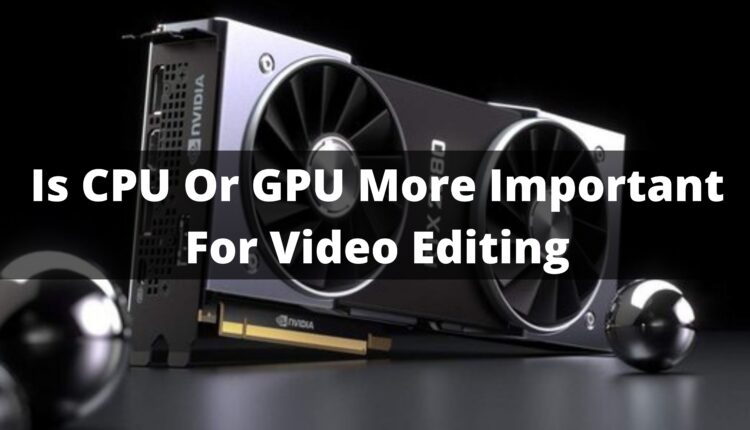 There has been a lot of discussion in the video editing community around whether the CPU or GPU is an essential component for video editing.

Video editing will never be GPU or CPU-bound. New hardware that allows us to push the video editing boundaries further keeps being released, but new video editing programs are being written on both platforms.

Most users associate processor performance with video editing applications and want to use their new CPU with the same processors. Still, actual performance differences are masked by inaccurate comparisons.

On a basic level, CPU and GPU performance will determine how fast you can edit your videos quickly, how stable your project is, whether your project will be laggy and unstable, or if you’ll have smooth playback.

CPUs are faster at performing calculations than GPUs so a CPU-based system will be better for video editing.

While there are plenty of great reasons to use a GPU for video editing —to put more visual effects and effects like blur onto your favorite videos—I still prefer using my trusty gaming machine.

There is no doubt that video editing is a resource-intensive task. Even with modern computers, getting the most out of your hardware can be challenging.

One of the most critical resources for video editing is your graphics processing unit (GPU).

In almost every case, users will need to purchase a graphics card with four gigabytes of VRAM to run most programs, such as Adobe Premiere Pro.

Setting this minimum is pointless because cards with 8GB or more are far more powerful.

This is because your GPU is responsible for rendering the images on your screen.

Without a powerful GPU, you will likely see choppy playback and poor image quality when editing video.

Your GPU can also be used for other resource-heavy tasks such as video encoding and 3D rendering.

If you are serious about video editing, it is worth investing in a powerful GPU.

Video editing is often a very GPU-heavy process, as it requires different filters and effects that can tax even the most powerful graphics cards.

This is why many professional video editors often invest in high-end GPUs that can handle the demands of their work.

Is Gpu Needed For Video Editing?

GPUs are often thought of as being necessary for video editing due to the high computational demands of the task.

However, a modern CPU can handle video editing quite well, with a dedicated GPU only really being needed for more intensive tasks or if you want to take advantage of certain GPU-accelerated features.

A strong video editing PC is built around a strong CPU. A graphics card is also valid, but it is not necessary to purchase a powerful GPU. Don’t skimp on RAM; 8 to 16 GB should suffice for most projects.

GPUs are essential for certain types of video editing but are not necessary for every type of editing.

You’ll see the difference a GPU can make if you work with 4K video or complex effects. And if you’re planning on doing any color grading, a GPU is essential.

A GPU, or graphics processing unit, is not required for video editing but can be helpful in some situations.

For example, a GPU can be used to render 3D graphics or speed up video file encoding.

Does Cpu Matter For Video Editing?

A CPU, or central processing unit, is the main chip in a computer that performs calculations and logic operations.

Video editing is a resource-intensive task that can benefit from a faster CPU. A faster CPU can render video faster and perform other video-related tasks more quickly.

That’s why the CPU matters just as much as the software you’re using when it comes to video editing.

If you’re serious about video editing, you need a computer that can handle the demands of the software.

That means investing in a good CPU. The CPU is the heart of your computer, and it’s what will make or break your video editing experience. Please don’t skimp on the CPU when it comes to video editing.

A faster CPU will be able to encode and decode the video signal faster and will also be able to render the video frames more quickly.

This will result in a smoother video editing experience and allow you to edit your videos at a higher quality.

The CPU is the brains of your computer, and video editing is a very demanding process that puts a lot of strain on your CPU.

If you don’t have a powerful CPU, your video editing software will struggle to keep up with your editing demands, and your videos will suffer.

Many people use laptops for video editing, but is a gaming PC good? The simple answer is yes because gaming PCs are built for performance.

They have the power to handle demanding tasks like video editing. Gaming PCs have high-resolution displays, large storage capacities, and top-of-the-line graphics cards.

Some might say that a gaming PC is a good option for video editing, and here’s why.

They also tend to have a lot of storage space, which is essential for storing raw video footage and saving your edited videos.

Plus, many gaming PCs come with extras like RGB lighting and customizability, making your video editing setup look more professional.

Gaming PCs offer the best of both worlds regarding video editing. With the right specs, a gaming PC can offer the power of a desktop PC while still being portable enough to take with you on the go.

Gaming PCs have various features that can make your work easier, such as multiple monitor support and high-end graphics cards.

A gaming PC is worth considering if you’re in the market for a new video editing rig.

Can Ram Affect Display? | All You Need To Know

Why Should You Choose Cloud Hosting Services?

How Does Link Building Help My Business?

Why Should You Choose Cloud Hosting Services?