How Long Will React Native Stay Popular? Everything You Need To Know In 2022 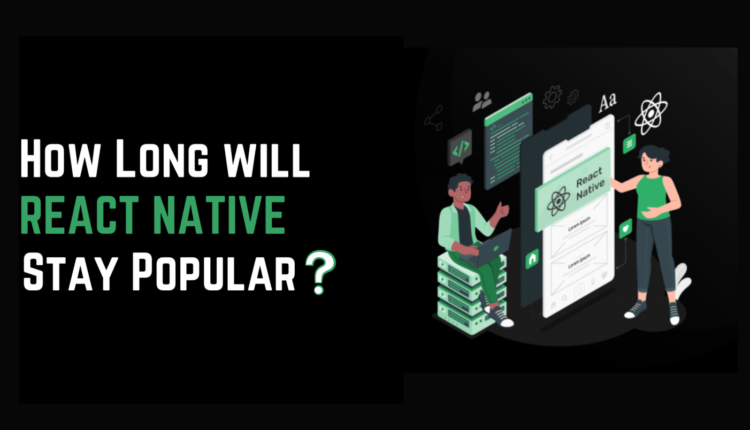 Technology is growing at a rapid speed. One of the sectors, that have experienced explosive growth, is mobile app development. There is a huge scope in the mobile app market and hence it is no wonder that it is witnessing unprecedented growth.

Moreover, technologies and frameworks become outdated very soon. This is because newer technologies are introduced frequently. React Native, one of the cross-platform frameworks developed by Facebook, has gained a lot of popularity in the past few years.

Will React Native app development remain popular? If so, for how long? These are the questions raised by experts as well as newbies. Do you want to know the answer? Go ahead and read a detailed analysis to find the answer to your question.

Why Is React Native Popular?

The above two graphs show the unarguable popularity of React Native. Yes, there can be no doubt about its popularity but why is it popular? Let’s dig in.

What Are The Reasons That Make React Native The Most Sought-After Framework?

Frameworks keep on evolving not just once a year more than two or three times every year but not all of them are successful. In fact, many have failed miserably.

React Native is one of the most successful frameworks because it is revolutionary and additionally has many unique features. It is used by the top companies because of the following reasons.

1. The Development Time Is Short:

In this modern technical world, time is more precious than ever before. Hence, time saved is money saved. The React Native app development and deployment time is comparatively shorter as it has many helpful state management tools. Moreover, you just have to create one layer for android and iOS. This makes it time-savvy.

2. It Allows The Creation Of Cross-Platform Apps?

Cross-platform compatibility is one of its pluses. You will be able to build iOS and Android apps simultaneously using a single code base.

You will be saved more than 50% of your efforts and 40% of your cost when you work with React Native frameworks.

The technical team of Facebook supports React Native. Hence there can be no doubt that there is a huge community to support the framework. There are millions of questions related to the framework already existing in the Stack Overflow.

Additionally, there are several tutorials and libraries to help not only the newbies but also the experienced developers. Moreover, the company is planning to step up its community support to make sure that the users are benefited.

The startup businesses love this framework because it gives them a competitive edge. The cost is lower and the time taken is shorter. Moreover, it has readymade tools, libraries, and reusable components.

Additionally, only a minimum number of developers are needed for efficient React Native app development. So the startups prefer React Native.

5. It Is Easy To Convert A Web App Into A Mobile App With React Native?

Gone are the days when websites were enough for businesses. There are billions of mobile users. So, today no business can succeed unless you have a mobile app.

React Native framework allows you to convert a web app into a mobile app because of its user-friendly features. You can easily change the layout to suit the UI. Since there is no need for programming and coding from scratch you can save a lot of time.

Its performance is excellent because it uses Graphic Processing Unit. So it is not only super fast but also strong-performing.

7. It Has A Hot Reloading Feature:

The hot reloading feature is beneficial because every time you make changes to the code there is no need to reload the entire app to see the changes you have made.

React Native tracks the changes made and reloads only the changed file. This is time-saving. Moreover, it allows you to modify codes without having any second thoughts. As it saves time and effort, developers love this feature.

What Is The Future Of React Native?

React Native has reached new heights in the past few years. What is its future?

What Are The Benefits Of React Native?

1. It is time-saving and cost-efficient. Maximum code reuse helps in reducing time and cost. Both cost and time are very important for app development.
2. It provides a great developer experience. The starters find it easy to learn and use because of its user-friendly features.
3. The community keeps on developing. Since it is supported by Facebook, the under-development framework is constantly improving.
4. Increased flexibility is one of its main benefits.
5. You can publish updates faster.
6. Augmenting an existing app is easier with React Native.
7. It is easily moveable. If you want, you can move to another framework in the future without any difficulty.

First and foremost, React Native has made app development easier and quicker. The long-term plans are promising. Moreover, its thriving community is impressive.

It is the best option for people who want to create apps at an affordable cost. Furthermore, it is lightweight and easy to learn. Its future is bright because it has a lot of potential.

How To Boost Your Business By Marketing Techniques?

How To Give Employee Appreciation Gifts